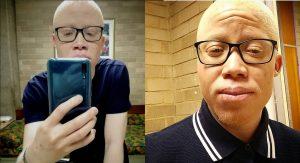 Profile, age and life of Tebatso Mashishi, also known as Kgosi from Muvhango.

Tebatso is a male South African, quite talented in his art and also a millionaire. He is a professional actor, rapper and song writer. He is quite known for acting as Kgosi on Muvhango.

Though the young entertainer has albinism, however, that does not stop him from being himself and hardworking.

Since he began to make debut on Muvhango, he has been more popular and has a bigger fan-base. He once revealed that he is the second most popular actor in his hometown, the first being from a very huge South African TV drama Skeem Saam, and he goes by the name Africa Tsoai.

Age (How Old Is Tebatso Mashishi aka Muvhango actor Kgosi)

Just before now, many did not know how old the South African rapper was, but recently after his issue with his girlfriend, his real age has been leaked. Tebatso Mashishi is 29 years old as at 2022. He was born in 1993.

Tebatso had been dating Nanamhla Dalasile, till their recent separation. Nanamhla is a South African female celebrity and an actress who recently called the cops on her boyfriend, Tebatso after she claimed he stole her gadgets.

Read more information about Tebatso’s girlfriend Nanamhla Dalisile and why she called the police on his boyfriend.

The male celebrity once talked about the difficulties he faced as an albino and also said he likes to give himself a name, “a different kind of black”.

He was first brought to limelight in the year, 2015 right before he was done with his education. Tebatso is a currently a father of a young girl who he loves to show off via his social pages.

Like stated earlier, he is an actor, rapper and also a writer. He has his stage name as Prodykal Son which according to him was taken from th parable of the prodigal son in the bible.

He was not from a rich home and so vowed that he will make it in his lifetime.

He bagged his degree from Tshwane University of Technology, while studying he got his first acting gig at Mzansi Magic Ya Lla. Two years after, he got another role in the popular movie, Matwetwe and he acted as Hustler Papi, from there took off his professional acting career.